Thinking of Immigrating to Canada? Welcome to Toronto!
Skip to content

Toronto is a place of diversity and of contrast. As of 2016, 46% of the population of Toronto were immigrants. Here we expand on why Toronto is an amazing place to live in! 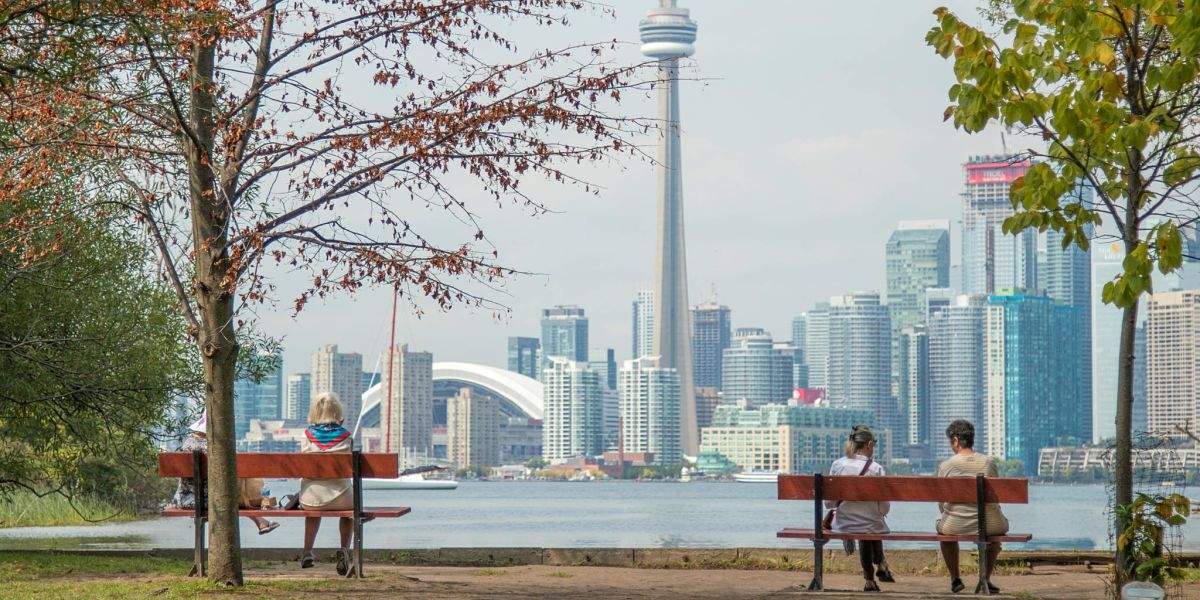 Toronto is a place of diversity and of contrast, with a unique feel among world cities. It was nicknamed ‘Toronto the Good’ during the Victorian era because of its prudish reputation, although this hardly fits the spirit of Toronto today. Toronto is a huge, sprawling metropolis made up of a mosaic of different cultures from every corner of the globe. If you’ve been contemplating, this is your sign to move to Toronto. An RCIC can be a good idea for some extra help with the process of application.

“The city had been built by people from innumerable elsewheres. It was a chaos of cultures ordered only by its long streets. It belonged to no one and never would, or maybe it was a million cities in one, unique to each of its inhabitants, belonging to whoever walked its streets.”

Toronto is one of the most attractive cities in the world for immigration. Many people from all around the world are visiting the city each year, and many of them are fall in love with the city and look for some expert help to move to Toronto.

When we talk about Toronto, there is both the City of Toronto and what is called the Greater Toronto Area (GTA) which covers a much wider space. The population of the city was 2.96 as of 2018. However, the GTA had 6.3 million people.

In a city made up of only 50% Caucasian people, most immigrants fit right in and find their place. In 2016, the top 3 countries immigrants originated from were India, China, and the Philippines. As of 2016, 46.1% of the population of Toronto were immigrants. Toronto is the city where everyone fits in if they so desire.

Toronto is packed with various ethnocultural neighbourhoods filled with immigrants. That gives you diverse options to choose from when moving to Toronto. These areas are fun to visit as well and are part of the excitement of living in Toronto. Some of these areas include:

This area of Toronto lies along Danforth Avenue, or “The Danforth” to locals. There are dozens of Greek restaurants to choose from if you enjoy good souvlaki or some baklava, as well as some great shops, bars, and cafes. Even the street signs are in Greek!

There’s a massive Chinatown at Spadina and Dundas with a long history. Head down there if you feel like some authentic, delicious Chinese food. There are also numerous shops, museums, and spas in the neighbourhood.

This bustling, crowded area can be found on Gerrard Street East, between Coxwell and Greenwood Avenue. It’s sometimes referred to as Gerrard Indian Bazaar because there are 125 South Asian shops packed into a tight little area.

There’s no doubt that the cost of living is very high in Toronto. You do have to make a decent living to get along financially, at least in the city itself.  The average household income in Toronto is $98,000 a year, and $104,000 in the GTA.

However, there are many, many great suburbs and outlying areas like Mississauga and North York which are a lot more affordable. They are all within commuting distance of Toronto, by car or public transport. What’s more, the unemployment rate in the city of Toronto is only 6.4, and 6.0 in the GTA. Your chances of finding employment are high. Many newcomers immigrate to Toronto on special employment programs like the Federal Skilled Worker Program.

Whatever industry you work in, you’re almost certain to find a job when you move to Toronto. Important industries include service, fashion, entertainment, retail, pharmaceutical, law, and medicine.

Toronto has the best educational system in Canada with very high-quality schools. Aerospace is also a huge area, with Canada’s second-largest workforce in the field. Other important industries include finance, tourism, and food and beverage. There are helpful resources online to help you find work in Canada.

Getting a job could be helpful for those who plan to get a permanent residency (PR) in Toronto.

The high tech industry is currently booming as Toronto is becoming a major city in that arena. A tech talent report from 2017 listed 22, 500 new technology jobs – far greater than New York City at 5370. Some of the industry from the States has immigrated to Toronto, and it’s largely considered to be because the level of talent here is so high.

Toronto also has a number of very high-level institutions like the University of Toronto, which offer excellent academic training to future high-tech workers. People move to Toronto from the US to study and they decide to apply for permanent residency (PR) afterwards because of the number of opportunities.

Ready to Begin Your Journey to Canada?
Book a free consultation with our certified immigration consultants today

Despite commonly spread belief, the weather should not be a reason to hesitate when considering moving to Toronto.

Spring and summer are really lovely seasons in Canada. The flowers start blooming, the sun comes out, and it stays for quite a few months. Sometimes it can get hot in the summer, even up into the 30s. However, much of the time it stays in an ideal zone around 25.

Canadian fall is truly beautiful and ethereal, with its coloured leaves in shades of reds, oranges, yellows and purples falling on the ground where you walk and crunch under your feet. The temperature starts to get cooler during this time, especially at night. It can get extra rainy in the fall sometimes, although in Canada it rains every season.

Winter in Toronto is not the nightmare it’s made out to be. Toronto has a much milder winter than Montreal and Ottawa. There may be days when you leave the house to cold and snow blowing in your face, but there will also be times when the sun will come out and reflect in various magical colours across the snow. Moments where you’ll see children making snow angels and snowmen, and playfully throwing snowballs at each other. At those times, even in wintertime, you’ll be glad you moved to Toronto.

There’s no shortage of entertainment in Toronto. There are several sports stadiums, and hockey and basketball teams to cheer for like the Maple Leafs and the Raptors. For those who love theatre, there are always a number of great shows in town, although this is usually costly.

However, there’s plenty of cheap or free entertainment in the city. The Toronto Library system is extensive and allows you to borrow books and music for free. There’s a library in most neighbourhoods. Toronto also has an excellent Parks and Recreation service, with numerous beautiful parks that include equipment for kids, fields to play sports, and often courses and programs.

Anyone who loves skiing will find a number of places like Collingwood which are within a couple of hours of the city – close enough to come back the same day and save on hotel costs. These locations all rental equipment, and you can purchase a day pass to the ski hills.

Why Immigrate to Toronto?

Is immigration to Toronto a good idea for you? It depends. If you love living in an urban setting surrounded by people, shops, theatres, and buildings, then it may be a good location. If you’re a professional looking to build a career in a new home, Toronto definitely could be a suitable spot for you.

If you love being around a mix of cultures and living in an area surrounded by people from your own region, then Toronto is a city you should certainly consider for immigration.

There’s a reason why Toronto is such a popular place for immigration. It has a little bit of everything – diversity, culture, educational institutions, nature, entertainment…and immigrants! Canada2036 is a place for you to get started as a new Torontonian if you’re not sure where to begin. You can also seek out the advice of an RCIC agent to help you immigrate to Toronto.

Immigration to Canada Immigration to Ontario
Get started on the Road to Permanent Residence
Sign up to our newsletter to receive our PR Roadmap delivered straight to your inbox, along with the latest immigration news!
Share
Facebook-f Twitter Linkedin-in Pinterest-p Reddit-alien Envelope

Melissa is currently living in her hometown of Toronto, Canada. Her family originates from both Poland and Scotland. She’s familiar with the immigrant experience, having lived abroad for 18 years. Melissa has a master’s degree in Immigration and Settlement which focuses on Canadian immigration.

The Canadian government has responded to the coronavirus pandemic by shutting down the Canada-US border and restricting all international travel. These travel restrictions are likely to remain active until 2021.

Become a Canadian is a private immigration consultancy that specializes in helping people around the globe to immigrate to Canada. The website is owned and operated by Immigration Solutions, S.L., which is an international private company with offices in Madrid, Spain and Ontario, Canada.

In-Demand Jobs for Immigrants in Canada

As more and more people choose to work and settle down in the Great White North, jobs opportunities in Canada for immigrants are also increasing. Here we tell about in-demand jobs that you might consider when planning your immigration.

Many people from all over the world consider Canada a great immigration destination. Here we expand on why Canada could be a destination of choice for Qataris citizens and how they may plan the move.

PROICC is an immigration consulting firm owned and operated by CANADA IMMIGRATION LTD. In this review we will put them under the microscope and will show you why this company is not our top recommendation when it comes to immigration assistance.

One of the easiest ways to find good employment opportunities is through job boards. These are the top 8 job boards for immigrants

Immigrate to Canada as a Skilled Worker in 2021

Education in Canada is known to be one of the best in the world. Luckily, Canadian universities welcome international students and even offer scholarships for them. Keep reading to find out more!

How to Get a Job in Canada as an Immigrant

Finding a job in Canada as an immigrant is easier than ever. With increasing economic demands and broadening horizons, you’ll find a variety of jobs available. Here we tell more about how to find a job and why it is important if you want to immigrate.