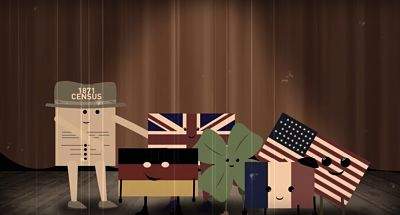 150 Years of Immigration to Canada: Foreign-Born in Canada

Historically, Canada has always had numerous immigrants flowing into the country. The number of foreign-born individuals in Canada at any given time varies depending on the time in history and the circumstances. This information is collected via census data.

The Canadian Census is a governmental survey of the population, recording both numbers and other information about citizens. The government carried out the most recent census in 2016. In

terms of immigration, the data showed that 7.5 million people were born abroad.

The Ebb and Flow of Immigration

The video explains that in 1871 there were 16.1% foreign-born individuals in Canada. They were mostly from the UK and Ireland as well as the United States, Germany and France. They settled primarily in the Prairies, British Columbia and the territories. Immigration in Canada reached a peak at the beginning of the 20th century.

In 1921, the census recorded 22.3% foreign born. This was a time when Canada was really encouraging immigration and there were opportunities. Newcomers flowed into the country, from the UK but also from Eastern Europe and other countries. The Depression in the 30s and World War I slowed immigration down.

The surge of economic activity after the war led a number of immigrants from Germany, the Netherlands, Italy and Greece among other places to make their way to Ontario, British Columbia, and Quebec. Once the 60s arrived, Canada’s borders really opened up. The Points System was implemented, which made it possible for people from all over the world to have a chance at migrating to Canada.

Canada is the Future

The video expresses that in 2016, immigrants were from more than 200 native lands. Most people who arrived between 2011 and 2016 (61.8%) were from Asia and the Middle East. More recently, most of the newcomers are arriving from the Philippines, India and China.

Canada is a country that’s very open to receiving immigrants. It’s also an incredibly diverse place, meaning you’ll almost certainly find a community from your country of origin to settle around if you immigrate. This nation has been integrating newcomers into the community for over a century, and we have a lot of experience.

If you want to settle in a new place, a diverse country with a bright future, start planning your immigration now. Seek out the services of an RCIC (Registered Canadian Immigration Consultant) to help you plan your fresh beginning in Canada. Good luck!

Contents hide
1 150 Years of Immigration to Canada: Foreign-Born in Canada
1.1 The Ebb and Flow of Immigration
1.2 Canada is the Future